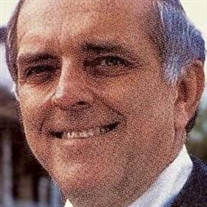 I think, often, that if I had an obituary to write for myself, it would probably say something like ‘Family, Fraternity, and University.’” -Sonny DeVillier, 1995. Friends and family are invited to attend the memorial services for Veil David "Sonny" DeVillier. The service in Baton Rouge will be held Friday August 21 2020 at Rabenhorst Funeral Home Downtown, 825 Government St. Baton Rouge, La 70802 from 4:30 pm to 6:00 pm. Fr. Jeff Bayhi will begin the service at 5:30 pm. The service in Eunice Louisiana will be held Saturday Aug 22 at St. Anthony Catholic Church, 310 West Vine Ave, Eunice, LA 70535 at 10:30 am. Deacon Gary Gaudin will officiate.Following the service please join us at Nick's restaurant on 123 South 2nd Street in Eunice for refreshments and light snacks. In lieu of flowers, memorials may be made to the LSU Alumni Association. Veil David “Sonny” DeVillier, was born March 25, 1935, and died of COVID-19 on April 17, 2020, in Baton Rouge, Louisiana. He was preceded in death by his wife, Flora (“Tot”) LaHaye DeVillier, daughter, Kaye DeVillier Person, and grandson, Alexander Scott Fisher. Sonny is survived by a daughter and granddaughter in Baton Rouge, Anne DeVillier Charpentier (John) and Brenna K. Fisher, a grandson and great-grandchildren in Lafayette, B. Lance Person (Frances), Flora K. Person, and Theo J. Person, a brother Joseph Ettienne “Tanny” DeVillier, and sister Debra DeVillier in Eunice. Sonny graduated from Eunice High School in 1953, where he served as the school’s first student body president. He attended Louisiana State University, earning a bachelor’s degree in 1957 and a Juris Doctorate from LSU’s Hebert Law Center in 1960. While attending LSU, Sonny was an active member of his beloved fraternity, Lambda Chi Alpha, and served as its president for three terms. Sonny remained involved with the fraternity for decades; he served as its LSU Alumni President and as a member of the Grand High Zeta, the fraternity’s national governing board. Sonny was honorably discharged from the Army in 1966, as an Infantry Captain. Sonny was feverishly involved with John F. Kennedy’s presidential run, opening a campaign office in Eunice, Louisiana, and was one of only 1,600 people invited to attend the President’s funeral services in St. Mathews, Washington, D.C. He was also actively involved in John McKeithen’s gubernatorial campaign, and when Governor McKeithen was elected, he chose Sonny as Chairman of the Inaugural Committee. Sonny deeply loved LSU. He was proud to have been a driving force in establishing LSU-Eunice—as the Eunice News wrote at the time, Sonny was “among the most ardent workers for the passage of the measure which created the college here.” He also worked as the Special Assistant to the Chancellor of LSU, served as the president of the LSU Alumni Association, and sat on the Alumni Association’s Board of Directors. Sonny served as the president of Acadiana Bank and Chairman of the Board of the Planters Trust & Savings Bank. He also worked as Chief Counsel for the oil and gas division of Louisiana’s Office of Conservation and as the Executive Director of the Louisiana State Trooper’s Association. The family would like to thank his dear friends, Rodd Naquin and Jason Borné, for their continued help, love, and friendship until the very end. Quirk & Son Funeral Home in charge.

I think, often, that if I had an obituary to write for myself, it would probably say something like &#8216;Family, Fraternity, and University.&#8217;&#8221; -Sonny DeVillier, 1995. Friends and family are invited to attend the memorial services... View Obituary & Service Information

The family of Veil David "Sonny" DeVillier created this Life Tributes page to make it easy to share your memories.

I think, often, that if I had an obituary to write for myself,...

Send flowers to the DeVillier family.