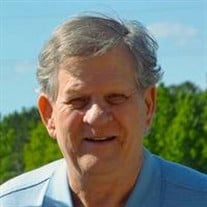 Steven Britt Jones, age 65, of Summit , MS., formerly of DeRidder, LA., was born in Biloxi, MS. on May 24, 1954. He died in Acadian Medical Center of Eunice, LA on September 12, 2019 surrounded by his parents, sisters, and brother-in-law. Visitation will be Saturday September 14, 2019 from 10:00 A.M. till time of service at 1:00 P.M. at Hartman-Jones Funeral Home of McComb, MS. Rev. Glen Martin of Brookhaven, MS., will officiate and a 4 P.M. burial will be in Harperville Cemetery in Harperville, MS. Steven was a 1972 graduate of DeRidder High School. He was witty, bighearted, and adored his nieces, nephews, great-nieces, and great-nephews. Steve especially looked forward to Thanksgiving and Christmas when he would take a week off of work and “head to Mississippi” to spend the holidays with his parents and family. He enjoyed hunting and fishing. He also spent many long hours watching old westerns on TV. Steven spent the majority of his life in DeRidder where he worked as a truck driver for Norwood Hickman and then for Ricky Day Trucking. He moved to Summit, MS in 2016 where he lived with his parents after being diagnosed with dementia. Steven is survived by his parents, Billy Austin and Peggy Britt Jones, of Summit, MS; sister, Christal (Christy) Jones of Opelousas, LA; sister, Suzanne Jones Eades and husband, John, of Opelousas, LA; sister-in-law, Chrisy Navarre Jones, of DeRidder, LA; and former sister-in-law, Renee Bailey Welch, of DeRidder, LA. He is also survived by nephew, Jacob (Sonny) Jones and wife, Ashley, and their daughters, Madison and Cheyenne, of DeRidder; niece, Sarah Jones Smith and husband, Brandon, and their children, Kinsley, Kinton, and Tori, of DeRidder; niece, Brittany Eades Brown and husband, Ian, and their daughters, Ella and Jillian, of Arnaudville, LA; and nephew, Patrick Eades and wife, Maggie, and their sons, Andress and Charley, of Ville Platte, LA. Steven was preceded in death by his brother, Billy Austin Jones, Jr., his paternal grandparents, Charley Carlton and Susie Warren Jones, and his maternal grandparents, Malcolm Lyle and Joyce Williamson Britt, and all of his aunts and uncles. In lieu of flowers, donations can be made to St. Jude Children’s Research Hospital in Memphis, TN.

Steven Britt Jones, age 65, of Summit , MS., formerly of DeRidder, LA., was born in Biloxi, MS. on May 24, 1954. He died in Acadian Medical Center of Eunice, LA on September 12, 2019 surrounded by his parents, sisters, and brother-in-law. Visitation... View Obituary & Service Information

The family of Steven Jones created this Life Tributes page to make it easy to share your memories.

Send flowers to the Jones family.