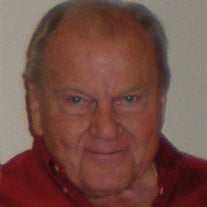 Samuel Jonas Stagg Jr. M.D. died peacefully on September 2, 2021, in Fairhope, Alabama, where he lived for three years with his daughter, Nancy, her husband, Paul, and his grandchildren, Lily and Emmie. Dr. Stagg felt blessed to live and die among Nancy’s loving family. He also advised that no one should be sad about his death because after 90 years he was going home. A mass of Christian burial will be held on Monday, September 6, 2021, at 10:00 a.m. at St. Augustine Catholic Church in Basile, Louisiana, which will be officiated by The Reverend Keenan W. Brown. Visitation will be held on the same day at Quirk & Son Funeral Home of Eunice at 7:00 a.m. for family and 8:00 a.m. for friends, with a rosary at 9:00 a.m. in Quirk’s which will be led by Deacon Gary Gaudin. The burial service will be at St. Augustine Cemetery immediately following the mass. The family asks everyone to wear a mask to the visitation, service, and burial. Dr. Stagg devoted his life to the practice of medicine. He often told us that as much as he liked the intellectual challenge of internal medicine, his favorite part of medicine was talking with and helping his patients. In fact, when he retired after more than 60 years of practice, he frequently lamented that he could no longer visit with his patients. To his children, he was a constant reminder that hard work is necessary in this life, that you should not blame your behavior on life’s circumstances, and that the best thing we can do is to love each other. Dr. Stagg enjoyed his family and friends, and he made friends wherever he and his wife, Dorothy, went on their many travels. His favorite place was his “camp” above the Royal Street Pharmacy in the French Quarter, where he sat on the balcony and watched the world go by. We all miss those times and the pearls of wisdom he would share with his children, grandchildren, or anyone who happened by. He also loved LSU, where he graduated from medical school in 1956. He never missed watching The Tigers, if he could help it, and he would want us all to say, “Go Tigers!” in his memory. Dr. Stagg was also very proud of The Eunice Players’ Theatre, which he helped establish in 1969. And, as anyone who knows him is aware, Dr. Stagg loved his cold Heineken, although his favorite drink switched to the house pinot noir during his final years. Dr. Stagg cherished his parents, Mr. and Mrs. Samuel Jonas Stagg of Basile, and all of his relatives from near and far. He was proud to be from Basile, where he graduated from high school as valedictorian in 1948, where he served on the board of Basile State Bank until recently, and where he will be buried. Dr. Stagg was predeceased by his wife, Dorothy Russell Stagg, and his parents, Samuel Jonas and Frances Smith Stagg of Basile. Dr. Stagg is survived by his children, Samuel Jonas Stagg, III (Jody) and his wife, Julie Wenger Stagg, Susan Stagg Simon and her husband, Louis Simon, Stephen Woodson Stagg and his wife, Gena Remy Stagg, David Edward Stagg and his wife, Mona Murrel Stagg, and Nancy Stagg Fontenot and her husband, Paul Emery Fontenot; his step-children, Marie Leger, Lisa Leger Brown and her husband, Paul Eugene Brown, and Elizabeth Leger Cuevas; and many grandchildren and great-grandchildren whom he loved dearly. The grandchildren will serve as pallbearers. Dr. Stagg was thankful for all of his family and friends who made his life so memorable. The family wants to thank everyone who has provided so much love and support to our father and us during this time, including his caregivers, Mila Rodriguez, Nancy Thompson, Mary Ann Young, Francine Moffett, and Meagan Tice of Kindred Hospice. You and everyone else who helped are all wonderful! In remembrance of Dr. Stagg’s life, the family asks that any charitable donations be made to LSU Medical School or The Eunice Players’ Theatre. Additionally, due to the pandemic we will not have a gathering after the burial, but we plan to celebrate our beloved Sammy Jr. and his wonderful life on his birthday in May in New Orleans.

Samuel Jonas Stagg Jr. M.D. died peacefully on September 2, 2021, in Fairhope, Alabama, where he lived for three years with his daughter, Nancy, her husband, Paul, and his grandchildren, Lily and Emmie. Dr. Stagg felt blessed to live and die... View Obituary & Service Information

The family of Dr. Samuel Jonas Stagg Jr. created this Life Tributes page to make it easy to share your memories.

Send flowers to the Stagg family.