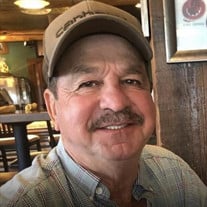 Robert Dean &#8220;Robbie&#8221; Arnaud made his last serious gesture on September 21, 2021 at the age of 67, when he left this life to proceed on to the road of more glorious deeds and antics. A Celebration of Life will be held from 3:00 PM... View Obituary & Service Information

The family of Robert "Robbie" Dean Arnaud created this Life Tributes page to make it easy to share your memories.

Robert Dean “Robbie” Arnaud made his last serious gesture on...

Send flowers to the Arnaud family.