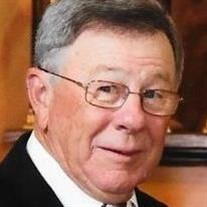 Dr. Ray Thomas Robicheaux, Sr. passed away on Wednesday, October 2, 2019 at the age of 76 after a brief illness. He never liked being the center of attention, but he's not around to stop us from writing this obituary. Ray was a passionate and caring math professor at LSUE (even the students who failed his courses adored him), and he was an avid catch-and-release fisherman (who NEVER exaggerated about his catches). He enjoyed gardening and being involved in his Church. He was an incredible father, and even on his grumpiest days, you could see his beaming, squinty-eyed smile when he was with his grandchildren. Though you might not know it because of how much time he spent at Walt Disney World, Ray was a resident of Eunice for nearly five decades. A Mass of Christian Burial will be held on Saturday, October 5 at 11:30 AM at St. Thomas More Catholic with Father Clinton Sensat officiating. Visitation and a celebration of life will be held on Friday, October 4 at Quirk and Sons Funeral Home beginning at 4:00 PM with a rosary following at 7:00 PM. Stubborn to the end, he told his family not to mourn him but just to embrace the good memories. Those happy memories will be cherished by his wife, Pat and by his three children, Renee Torpy, Tommy Robicheaux and wife Amanda, and Timmy Robicheaux. His many grandchildren will remember him for his usually unsolicited life advice and cheesy jokes. They are Lauren, Victoria, Caroline, Maria, Emmry, Heather, Hallee, and Evan, along with his great-grandson Slade. Other surviving family members include his three sisters, Carolyn, Fran, and Pam, and his brother, Bobby. He will be greeted in heaven by his parents Namese Thomas Robicheaux and Maria Jeansonne Robicheaux, by his nephew, Christopher Hatcher, and by his great-nephew, Matthew McIntosh. Ray had hay fever, so in lieu of flowers he would have appreciated donations to St. Jude Children's Research Hospital and an LSU win over 'Bama.

Dr. Ray Thomas Robicheaux, Sr. passed away on Wednesday, October 2, 2019 at the age of 76 after a brief illness. He never liked being the center of attention, but he's not around to stop us from writing this obituary. Ray was a passionate and... View Obituary & Service Information

The family of Dr. Ray Thomas Robicheaux Sr. created this Life Tributes page to make it easy to share your memories.

Send flowers to the Robicheaux family.