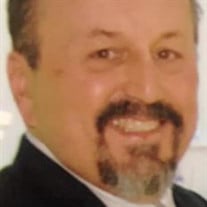 Paul F. Young Jr., 64, died on October 5, 2020. Son of Paul Floyd Young and Helena Miranda Young, he was born on October 28, 1955 in Fall River, Massachusetts, later moving to Church Point, Louisiana. He is survived by his six children: Brian, Kevin, Colin, Caitlin, Liam, and Aidan. He is also survived by his brother, Robert Young, his sister Frances Jennejahn and his sister Judy Murphy, as well as many cousins, nieces, nephews, and three beloved granddaughters. Paul was a 27-year employee of Verizon Wireless, where he worked as an electrician, and upon retirement, he moved to Church Point where he pursued hobby-farming, worked part-time as a chef, and immersed himself in the Cajun culture. Due to extenuating circumstances, services will be held at a later date.

The family of Paul F Young Jr. created this Life Tributes page to make it easy to share your memories.

Send flowers to the Young family.