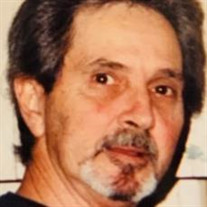 Michael Ray Faul passed away on Tuesday, May 5, 2020 at the age of 71. No Services have been planned at this time. Michael is survived by three sons, Daniel Ray Faul, Marlon Faul, Anthony Faul; the mother of his children, Melda Faul; two brothers,... View Obituary & Service Information

The family of Michael Ray Faul created this Life Tributes page to make it easy to share your memories.

Send flowers to the Faul family.