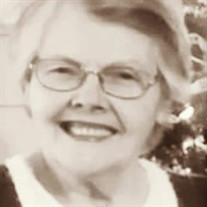 It is with heavy hearts that the family of Mary Tessie Gil announces that after a long battle with Alzheimer’s, she passed away peacefully on Tuesday, April 28, 2020 at the age of 79, at home with many of her children, grandchildren and great grandchildren surrounding her. A Private Graveside Service will be held on Thursday, April 30, 2020 at St. Paul Mausoleum with Deacon Chuck Ortego officiating. A Memorial Mass to celebrate the life of Tessie will be held at a later date at St. Thomas More Church in Eunice. Tessie was born on August 18, 1940. She was the daughter of Eloi and Lena Soileau, the seventh child of seven children, born a twin with her brother, Terry. Tessie married Eddie on September 7, 1957. They were married for 51 years when God called him home. Tessie was a devoted wife, mother, grandmother, daughter, sister and friend. She loved spending time with her family. She loved children and caring for them, especially babies. She cared for her baby dolls until the end. She was a wonderful model of motherhood and a beautiful example of love for God and her family. She encouraged her children to love God, Jesus and Mary the most; then to love everyone else. Her life was a true witness of that. She will be sadly missed by all who knew and loved her, especially her children, Eddie Gil, Jr., Nickey Gil and wife Jolene, Mark Gil and wife Ruth Ann, Timmy Gil, Julie Wedlock and husband Dwayne, Tammy Heinen; thirty grandchildren; fifty one great grandchildren; extended family, George and Gwen Gil, Robert Gil, Allie and Patsy Fontenot, Gertrude Soileau, Melda Dupre. She was preceded in death by her loving husband, Edward L Gil, Sr.; her parents, Eloi and Lena Soileau; her husband’s parents, Willie D and Mary Lou Gil; four brothers, Jenston Soileau, Huey Soileau, Allen Soileau, Terry Soileau; two sisters, Nettie Fontenot, Beverly Fontenot; two brother in laws, Dickey Gil, E. J. Lemoine; nephews, Glenn Lemoine, Chauncey Fontenot; nieces, Susan Kay Bodin, Jeanne Gil.

It is with heavy hearts that the family of Mary Tessie Gil announces that after a long battle with Alzheimer&#8217;s, she passed away peacefully on Tuesday, April 28, 2020 at the age of 79, at home with many of her children, grandchildren and... View Obituary & Service Information

The family of Mary "Tessie" Soileau Gil created this Life Tributes page to make it easy to share your memories.

It is with heavy hearts that the family of Mary Tessie Gil announces...

Send flowers to the Gil family.