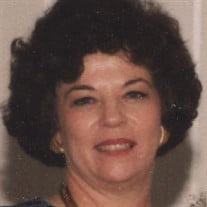 Leslie “Ilene” Weber LaFleur, 77, a resident of Eunice since 1967, passed away on December 28, 2019 at the age of 77. Ilene was born on July 26, 1942 in Lake Charles, LA and grew up in the Sulphur/Choupique area. She graduated from Sulphur High School in 1960, and began studies at USL. During her clinical semester, Ilene’s adventurous side led her to perform her laboratory clinicals at St. Francis Hospital in downtown Chicago, rather than choosing a more convenient location closer to home. Ilene received her Bachelors of Science in Microbiology from the University of South Louisiana in 1965. After returning to South Louisiana she decided to become a pilot and got her personal pilot’s license soon thereafter. She flew many flights around Louisiana and also a few in Alaska. She became a resident of Eunice in 1967 where she continued her career as a Clinical Laboratory Scientist working at Moosa Memorial Hospital then Acadian Regional Medical Center for over 40 years. Ilene was very active in her local church, participating in daily masses and was active in The Friends of Charlene Prayer Cloth Committee at St. Edward Catholic Church in Richard. She loved to travel and went on multiple pilgrimages during her lifetime. She is preceded in death by her husband of 31 years, Aubry Vance LaFleur, her father and mother; Leslie E. Weber and Mary Elizabeth Murray Weber and three of her brothers, Richard “Dick” Weber, Robert “Bob” Weber, William “Bill” Weber. She has 3 children; Bridget LaFleur-Carder, Peter LaFleur, married to Nancy Aguillard LaFleur and Edgar LaFleur. Ilene also has 6 grandchildren; Jade A. Carder, Andrew V. Carder, Luke R. LaFleur, Alison C. LaFleur, Aubry V. LaFleur and Wesley C. LaFleur and one great-grandchild, Rexton V. Carder. Ilene also has 5 surviving siblings, 3 brothers; David Weber of Bundaberg, Australia, Quintin Weber of Westcliffe, CO, Mark Weber of Sulphur, LA, and two sisters, Mary Elizabeth “Mary Beth” Horton and Tammy Vincent both from Sulphur, LA. A Mass of Christian Burial will be held on December 31, 2019 at 10:00 AM at St. Thomas Chapel with Father Wayne Duet officiating. At the request of family, visitation will be held on Monday, December 30, 2019 at Quirk and Son Funeral Home in Eunice from 12:00 PM until 10:00 PM with a Rosary being prayed at 6:00 PM by Deacon Chuck Ortego and will resume on Tuesday, December 31, 2019 at 8:00 AM until time of Services.

The family of Leslie Ilene Weber LaFleur created this Life Tributes page to make it easy to share your memories.

Leslie “Ilene” Weber LaFleur, 77, a resident of Eunice since...

Send flowers to the LaFleur family.