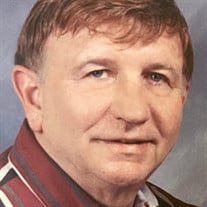 Kelley James McFarlain, Sr. passed away on Tuesday, March 24, 2020 at St. Luke’s Hospital in Houston, Texas at the age of 80. A Memorial Service will be held on Tuesday, June 23, 2020 at 11:00 AM at Quirk and Son Funeral Home of Eunice with Deacon Gary Gaudin officiating. Inurnment will follow in Mt. Calvary Cemetery. Fellowship will be on Tuesday, June 23, 2020 from 8:00 AM until 10:30 AM, with a Rosary being prayed by Deacon Gary Gaudin at 10:30 AM, followed by Services. Kelley was born on February 21, 1940 and grew up in Sulphur, Louisiana, where he graduated from Sulphur High School in 1959. He attended college at Northwestern State University and also McNeese State University. Kelley and his loving wife, Glenda, were married on June 17, 1961 and had 59 years of wonderful memories together. Early in his career, he worked in finance and eventually became owner of several credit bureaus in south Louisiana. In 1972, Kelley and his family made their home in Eunice, La. For sixteen years he was owner/manager of Credit Bureau of Eunice, Inc. Following that, he served as the Executive Director of The Housing Authority of Eunice, Inc. for twenty-five years until his retirement in December 2012. Over the years, Kelley had participated in numerous professional and civic/social organizations. He had also been active for several years with baseball and football programs for the youth in New Iberia, Crowley and Eunice. He was a parishioner of St. Anthony of Padua Catholic Church in Eunice and served on the church council for six years. Kelley, a loving husband, father, grandfather, great-grandfather and friend, was a very friendly, compassionate and caring person. He maintained many lasting friendships throughout his lifetime. His numerous interests included sports, cooking, music, boating, fishing, exercising and genealogy. He loved to travel and vacation with his family. Kelley was a great cook and always eager to share his cooking with family and friends. The joys of his life were his children, grandchildren and great-grandchildren and he cherished his time spent with them. He was always there with his love, support and encouragement. He will be dearly missed by his loving family and many friends. Kelley leaves behind to cherish his memories his loving wife of 59 years, Glenda Bourque McFarlain; one son, George McFarlain and wife Holly; one daughter, Lecia Brown and husband Danny; five grandchildren, Adrienne DeVille and husband Chris, Kelly Courville and wife Carly, Saige McFarlain, Christian McFarlain, Hayes McFarlain; two great grandchildren, Lucy DeVille Ellie DeVille. He was also survived by step grandchildren and numerous step great grandchildren, as well as numerous nephews, nieces, extended family and friends. He was preceded in death by his parents, George and Idell Comeaux McFarlain; one son, Kelley James McFarlain, II; four brothers, Elvern McFarlain, Murston McFarlain, Nolan McFarlain, Edward McFarlain.

The family of Kelley James McFarlain Sr. created this Life Tributes page to make it easy to share your memories.

Send flowers to the McFarlain family.