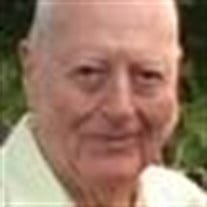 Jesse Roy Harrington passed away on Wednesday, October 28, 2020 at the age of 94. A Graveside Service will be held on Saturday, October 31, 2020 at 11:00 AM at St. Leo Cemetery in Robert&#8217;s Cove, La with Deacon Gary Gaudin officiating. Jesse... View Obituary & Service Information

The family of Jesse Roy Harrington created this Life Tributes page to make it easy to share your memories.

Send flowers to the Harrington family.