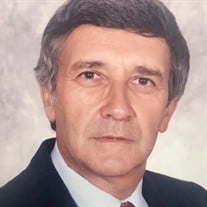 Cajun traiteur, tournoi champion, and professional psychotherapist Berk Veillon died peacefully at home on January 12th in Eunice, Louisiana. He was born in Ville Platte on September 24, 1934, into a sharecropper family. First in his family to attend college and obtain a Masters degree, Berk founded and ran the first mental health clinic in his hometown of Ville Platte. This institution still serves the community today and the community is grateful for his contribution. He obtained his PhD and continued his private counseling practice for many years after retirement. Dr. Veillon had many interests and hobbies. He liked to stay active and loved playing tennis with his Thursday morning men’s group, followed by breakfast at Ruby’s. Rising to the level of Eagle Scout as a young man, he had a close relationship to nature, camping and canoeing in Louisiana’s swamplands and state parks. Berk could be seen riding horses on the family property or early on a Mardi Gras morning, cracking open a can of beer and telling a few jokes in exchange for a ride. From the snare drum of a Eunice Two Step, to the tribal beat of a local drum circle, he loved a good rhythm. Whether it was sweating in a sweat lodge to sweating over an intense game of Bourré, he was always one to express himself to the fullest. His thirst for knowledge led him to experience many adventures in the material and spiritual world, while making friends along the way. He is survived by his three children, Vince, Ann Vivian, and Bernard, six grandchildren, Luke, Zach, Camille, Vaughan, Sophia, and Francois, and four great-grandchildren, Draegan, Eli, Flynn, and Aurelia. Service will be held at St. Peter’s Catholic Church in Grand Prairie at 10, Saturday, January 30th. His unforgettable character left a lasting impression on everyone he met. His memory will continue on as a celebration of life.

Cajun traiteur, tournoi champion, and professional psychotherapist Berk Veillon died peacefully at home on January 12th in Eunice, Louisiana. He was born in Ville Platte on September 24, 1934, into a sharecropper family. First in his family... View Obituary & Service Information

The family of James Berkman Veillon created this Life Tributes page to make it easy to share your memories.

Send flowers to the Veillon family.