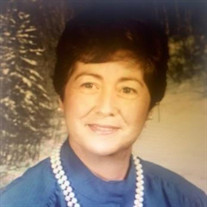 Irene Courville Lavergne passed away on Monday, October 11, 2021 at the age of 89. A Mass of Christian Burial will be held at 11:00 AM on Wednesday, October 13, 2021 at St. Anthony of Padua Catholic Church celebrated by Father Matthew Cormier.... View Obituary & Service Information

The family of Irene Courville Lavergne created this Life Tributes page to make it easy to share your memories.

Send flowers to the Lavergne family.