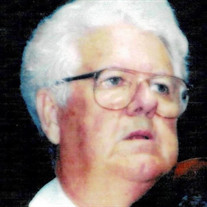 Harry LaFleur passed away on Thursday, April 30, 2020 at the age of 86. A private graveside service will be held on Friday, May 1, 2020 at St Paul Cemetery with Deacon Gary Gaudin officiating. Harry founded the Cajun French Music Association in November of 1984. The CFMA is an association dedicated to the promotion and preservation of Cajun music and culture. There were initially only 30 members, but it has grown to a membership of over 2,000 families serving seven chapters in Louisiana and three chapters in the Cajun Region of SE Texas. Harry always performed each year at the start of the CFMA’s annual festival in Lafayette, La. He was a master Cajun fiddler who also played the piano and guitar. In the 1950’s, he hosted a radio show on the KSLO station where he was able to demonstrate his command of both the French and English languages. He was a songwriter, as well, including two songs written for a film entitled Allie Baines Meets the Cajun that was released in England. The honors and awards won by Harry are too numerous to mention, but he will be remembered as a pioneer and champion of the Cajun music and culture. Harry is survived by three sons, Donald LaFleur and wife Stephanie, Michael LaFleur and wife Emily, Kenneth LaFleur and wife Jacqueline; two sisters, Mary Ann Broussard, Anna Brewer; five grandchildren; twelve great grandchildren. He was preceded in death by his parents, Doza and Emily Brown LaFleur; his wife, Mary Kathleen Barron LaFleur; one son, Marshall “Peter” LaFleur; three brothers, Raymond LaFleur, Frankie LaFleur, Dewey LaFleur; three sisters, Mary Babineaux, Elsie Bellard, Dora Belle LaFleur.

Harry LaFleur passed away on Thursday, April 30, 2020 at the age of 86. A private graveside service will be held on Friday, May 1, 2020 at St Paul Cemetery with Deacon Gary Gaudin officiating. Harry founded the Cajun French Music Association... View Obituary & Service Information

The family of Harry Lee LaFleur created this Life Tributes page to make it easy to share your memories.

Send flowers to the LaFleur family.