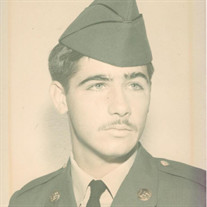 Not sure what to send?

Gerard “Jerry” Albertelli, Jr. passed away on Sunday, September 12, 2021 at the age of 69. A Mass of Christian Burial will be held at 10:00 AM on Wednesday, September 15, 2021 at St. Augustine Catholic Church in Basile with Father Keenan Brown celebrant. Rite of Committal will be held at 11:00 AM on January 28, 2022 in St. Augustine Cemetery with Father Keenan Brown officiating. At the request of family, visitation will be held from 8:30 AM until time of Services on Wednesday at St. Augustine Catholic Church. “Jerry” was a dedicated patriot, beloved husband, father, grandfather, great-grandfather, son, brother and friend. He was his family’s hero. He enjoyed many things, but, family always came first. He spent forty-eight beautiful years with the love of his life, his devoted Emma. He wanted her by his side always and that’s exactly where she was. Together they had three wonderful children, Misty, Jason and Shelly. In turn, they gave them nine grandchildren and nine great-grand children, whom he adored and they adored him in return. He constantly showed that he loved, cherished and supported his family. He will be deeply remembered for his life lessons, his undivided time and attention for each of us and his contagious smile. He was adventurous when it came to being outdoors. When not with his family, he enjoyed being at the camp with his buddies, fishing and hunting. You could find him cruising on his Can-am Spider with “his Emma” or in his shop cranking up the music with something cooking on the pit. Jerry was such an affectionate man. He had a personality that was so disarming and laid back that everyone became a friend and he was a stranger to no one. He was such a go-getter and achieved everything he set out to do. He greatly impacted everyone he met. We will miss you, until we meet again our beautiful brave angel. *Forever in our thoughts and a lifetime in our hearts* Jerry is survived by his wife, Emaline Rider Albertelli; his mother, Margaret Chatlos Albertelli; one son, Jason Rider; two daughters, Shelly Albertelli, Misty Albertelli; two brothers, Roy Albertelli, Terry Albertelli; one sister, Cindy Wright; nine grandchildren, Caleb Andrus, Richlyn Fontenot, Jeslyn Rider, Blaiklyn Dupont, Taylor Dupont, Devin Dupont, Braiden Ortego, Alexis Manuel, Drake Manuel; eight great-grandchildren, Zane, Noelle, Kynadi, Brailynn, Brantley, Leigha, Zayden, Riley and one soon to arrive, baby Smith. He was preceded in death by his father, Gerard Albertelli, Sr.

The family of Gerard "Jerry" Albertelli Jr. created this Life Tributes page to make it easy to share your memories.