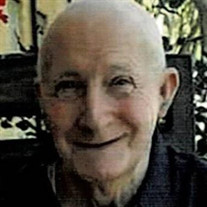 Elton Darbonne passed away on Saturday, April 18, 2020 at the age of 84. A Private Graveside Service will be held on Monday, April 20, 2020 at St Louis Cemetery with Deacon Chuck Ortego officiating. Elton is survived by four sons, Bobby Darbonne... View Obituary & Service Information

The family of Elton Darbonne created this Life Tributes page to make it easy to share your memories.

Send flowers to the Darbonne family.