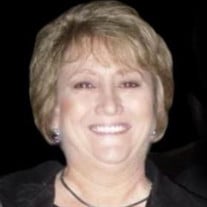 Donna Lee Simpson Miller, 72, of Eunice, LA passed away on December 26, 2021 at Delta Health Medical Center in Greenville, MS surrounded by her family. A Memorial Service will be held at 4:00 PM on January 7, 2022 at Quirk and Son Funeral... View Obituary & Service Information

The family of Donna Lee Simpson Miller created this Life Tributes page to make it easy to share your memories.

Send flowers to the Miller family.