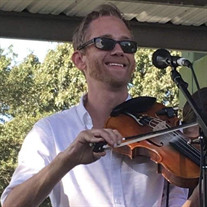 Courtney Wayne Granger passed away on Saturday, September 18, 2021 at the age of 39. A Funeral Service will be held at 11:00 AM on Tuesday, September 21, 2021 at Quirk & Son Funeral Home of Eunice with Father Clinton Sensat officiating. Burial will follow in St. Louis Cemetery. At the request of family, visitation will be held from 4:00 PM until 10:00 PM on Monday, September 20, 2021 and will resume at 8:00 AM until time of Services on Tuesday with a Rosary led by Deacon Dale Deshotel at 10:00 AM. Courtney Granger was a master fiddler and extraordinarily talented singer who traveled the world playing traditional Cajun music. He hails from the Balfa family lineage, which is evident in his powerful vocals and heavily Balfa-influenced fiddling. He was a great-nephew of Dewey Balfa. Courtney was named the CFMA Fiddler of the year twice. He was a member of the band, the Pine Leaf Boys, who were not only nominated twice for a Grammy Award, but selected by The Department of State to represent Louisiana and our Cajun music worldwide four times. While playing and touring full time with the Pine Leaf Boys and Balfa Toujours, Courtney has always had a deep affinity for and knowledge of classic country music. His idol was George Jones. He released his solo country debut album entitled “Beneath Still Waters” in 2016, produced by Courtney and the renowned Dirk Powell. Not only will he be missed by all who knew and loved him, but our Cajun music had lost a talented, great advocate. Courtney is survived by his life partner, Waylon Adams; his father, Kenneth Granger and wife Corinne; his mother Lori McManus Brown and husband Daniel; one brother, Derek Yeagley and wife Kristina; three sisters, Rachael Granger and wife Mandy Granger, Emily Brown and husband Gabriel Melancon, Alecia Duplechain and husband Matthew; maternal grandparents, Gardie and Jane Christ McManus; three step-brothers, Justin Brown and wife Katie, Jacob Brown and wife Sue, Joey Brown and wife Angelica; one step-sister, Amber Ice and husband Eddie and a host of nieces and nephews. He was preceded in death by his paternal grandparents, Weston and Cecile Balfa Granger.

Courtney Wayne Granger passed away on Saturday, September 18, 2021 at the age of 39. A Funeral Service will be held at 11:00 AM on Tuesday, September 21, 2021 at Quirk & Son Funeral Home of Eunice with Father Clinton Sensat officiating. Burial... View Obituary & Service Information

The family of Courtney Wayne Granger created this Life Tributes page to make it easy to share your memories.

Send flowers to the Granger family.