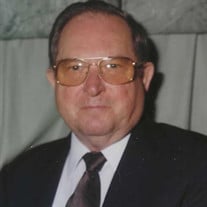 Charles Bradley passed away on Thursday, February 4, 2021 at the age of 87. A Funeral Service will be held at 2:00 PM on Wednesday, February 10, 2021 at Quirk & Son Funeral Home of Eunice with Brother Bert Langley and Brother Orville Rogers officiating. Burial will follow in Mt. Calvary Cemetery. Charles enlisted in the United States Army in 1953, in which he served his country for three years. Shortly after boot camp, Charles was sent to Germany and served there for two and a half years. While he was living in Germany, he became friends with a fellow soldier who was from Texas. One day, his Texan friend pulled a photo of a beautiful young girl out of his wallet. Charles was immediately intrigued, and he discovered that the girl was his Texas friend’s sister. After receiving his friend’s blessing, Charles began corresponding with her through letters. When he was released from the service, Charles traveled to Dallas to meet the beautiful girl from the pictures. He married her shortly after, and he was married to Lou Ann for 65 happy years. He loved the simple things in life—on any given day, you could find him singing or playing on one of the guitars he collected. He also enjoyed baking in the kitchen with his Lou Ann and then sharing their treats with family and friends. Charles was the go-to repairman in the Bradley home. In addition to him being the jack-of-all-trades in his household, he was also a master in the art of wood working, which included building clocks. Like all good men, Charles was a man of God. He was a member of the Pilgrim Rest Baptist Church, where he served as a Deacon. He also taught Sunday School for many years. Most importantly, Charles loved his family above all else. His wife, daughter, son in law, grandchildren, and great grandchildren were the loves of his life. He was affectionately known as “Paw” by his grandchildren. Charles lived a full life surrounded by loved ones, and he will be dearly missed by all of those who know and love him. Charles is survived by his wife, Lou Ann Marshall Bradley; one daughter, Julie Hormell and husband Tommy; one brother, Clyde Bradley and wife Beulah; one sister, Hazel Reeves; two grandchildren, Ryan Hormell and wife Jeannine, Ashley Fuselier and husband Chris; three great grandchildren, Drake Ryan Hormell, Avery Grace Fuselier and Amelia Claire Hormell. He was preceded in death by his parents, Claude and Cora Baker Bradley; four brothers, Clarence Bradley, Claude Ray Bradley, Carl Bradley, Carrol Bradley; two sisters, Dorothy Bult, Nora Fontenot. Carrying Charles to his final resting place will be Ryan Hormell, Chris Fuselier, Doug Guillory, Ryan Vidrine, Bryce Vidrine and Drake Hormell. Honorary pallbearers will be Hubert Stagg, Jr. and Buddy Marshall. Visitation will be held from 9:00 AM until time of Services on Wednesday, February 10, 2021 at Quirk & Son Funeral Home of Eunice.

Charles Bradley passed away on Thursday, February 4, 2021 at the age of 87. A Funeral Service will be held at 2:00 PM on Wednesday, February 10, 2021 at Quirk & Son Funeral Home of Eunice with Brother Bert Langley and Brother Orville Rogers... View Obituary & Service Information

The family of Charles Bradley created this Life Tributes page to make it easy to share your memories.

Send flowers to the Bradley family.