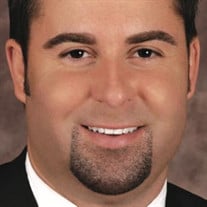 With heavy sorrow, we announce the passing of Bradley Allen Fontenot, a most loved member of our family. He passed away Saturday, June 20th, 2020 at the age of 42. He will be remembered by friends and family as a loving, strong, adventurous, sweet, and charismatic young man who had a big heart and would do anything for anyone at any time and always had a smile on his face. Brad attended St. Edmund Catholic School where he graduated in 1996. He was a 4 year multisport athlete and 3 year letterman. He received honors for both baseball and football by being named to the LA Allstate Team. He went on to earn a baseball scholarship to Northwestern State University, where he played for 3 years and transferred to LSU graduating in May 2001. Brad made the decision to follow in his father’s footsteps by earning an opportunity to become a State Farm Agent in Nacogdoches, Texas. He quickly earned his way to the top, by becoming one of the top 10 of over 19,000 State Farm agents. At that time, Brad was the youngest agent to earn the Multi-line Trophy Club Award, which is the company’s highest achievement. His most coveted and proud award came in 2007 when for the first time ever in company history, a father and son where both recognized as Multi-line Trophy Club recipients. Outside of his career Brad had a true love for his family. He loved nothing more than an early morning cup of coffee with his mama and daddy followed by an afternoon at the ballfield or in Mandy’s backyard playing with his nephews, Luca and Archie Ray. No way uncle Brad could visit Luca without playing a quick game of CAT, running some football routes, or at least some quick pitch and catch. Bradley Allen Fontenot is survived by his loving parents, Peggy and Kendall Fontenot of Eunice; his only sister who was the light of his life, Amanda LeJeune (Corey), The Woodlands, TX and two nephews who he adored as his own, Lucas “Luca” and Archie Ray LeJeune. He was preceded in death by his grandparents Murray and Frances Fontenot of Kinder; Rodney Allen and Lula Burch of Vinton; his aunt, Jean Fontenot Riley of New Orleans; his cousin, Roman Walter of Vinton. A private Interment service will be held for the immediate family on Friday, June 26th at 2:00 p.m. at Carter Cemetery, Park Road in Kinder. Father Hampton Davis of St. Anthony’s will officiate. Friends and extended family are invited to honor Brad by way of an autocade at Carter Cemetery, 728 Park Road, Kinder, LA 70648 immediately following the service at 2:30 p.m. Brad's family will be there to wave and send their heartfelt gratitude as the vehicles pass extending their kindness, love, and support. There will also be a basket drop off point to leave cards and sentiments at the cemetery exit. Our family is humbled and honored with the outpouring of love and support our precious friends and community have given us. It is truly fitting for Brad, who had a most generous heart for the incredible friends by his side. Memorial donations may be made to St. Edmund Old Gym Restoration at https://www.stedmund.com/old-gym-restoration-fund

With heavy sorrow, we announce the passing of Bradley Allen Fontenot, a most loved member of our family. He passed away Saturday, June 20th, 2020 at the age of 42. He will be remembered by friends and family as a loving, strong, adventurous,... View Obituary & Service Information

The family of Bradley Allen Fontenot created this Life Tributes page to make it easy to share your memories.

With heavy sorrow, we announce the passing of Bradley Allen Fontenot,...

Send flowers to the Fontenot family.