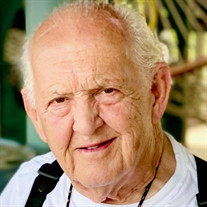 Alexandre Clifton “A.C.” Miller, Jr., M.D., born in Eunice, Louisiana on July 2, 1927, passed away on August 2, 2021 at the age of 94. A Mass of Christian Burial will be held at 2:00 PM on Wednesday, August 4, 2021 at St. Anthony of Padua Catholic Church with Father Hampton Davis celebrant. Burial will follow at Miller Cemetery. At the request of family, visitation will be held at the church from 12:00 noon until the 2:00 PM Mass. A.C., a lifelong resident of Eunice, graduated from St. Edmund High School, Loyola University New Orleans and went on to earn his Doctor of Medicine, with specialties in Obstetrics and Gynecology, at LSU Medical School in New Orleans. A.C. served in the US Navy aboard the USS Saratoga during World War II and was a lifelong member of the Doucet-Aucoin Post 8971, Veterans of Foreign War. In 1952, he married Jeanne Mac Savoy and remained her loving husband for 62 years. In 1960, A.C. and Jeanne returned to Eunice, where he began a 40-year-long career as the first OB/GYN in town. In total, he brought over 7,000 children into this world, and besides his family, considered this his single greatest accomplishment. After a brief retirement, A.C. served as an Emergency Room doctor at the hospital in Eunice for another decade before retiring at the age of 84. In addition to working full time, A.C. enjoyed collecting and restoring vintage cars, something he continued well after retirement. He spent the last eight years of his life with his children and grandchildren, working in his workshop and being out and about in Eunice, where he often ran into former patients – all of which brought him great happiness. A.C. is survived by his son, Alexandre Clifton Miller, III and wife Aneda Uzzo,; three daughters, Claire Miller Jazwick and husband Andrew Vern, Celeste Marie Miller and husband John David Brooks, Charice Miller Hebert, M.D. and husband Richard “Chip”, M.D.; one sister, Beverly Miller Longman; one brother, Harris J. Miller and wife Debbie; seven grandchildren, Nancy Smith, Grayson and Olivia Jazwick, Benjamin Brooks, Samual, Clayton and Andrew Hebert; brother-in-law, Clarence M. Savoy and wife Barbara; two sisters-in-law, Marie Louise Guillory and Beverly Mudd Miller. He was preceded in death by his parents, Alexandre Clifton Miller, Sr. and Ola Young Miller; two daughters, Catherine Marie, Cynthia Marie; two brothers, Robert H. Miller, Joseph G. Miller; one sister, Teresa M. Seale. A.C.’s family would like to thank the countless friends, family and caregivers for all their prayers and kindnesses over the past few weeks. A special thank you goes out to long-time friends Francis Ledet and Bernita Briscoe. In lieu of flowers, the family requests that donations be made to St. Edmund Catholic School, 351 W. Magnolia Ave., Eunice, La 70535; stedmund.com/online-donations with a designation to the Monsignor Harry Benefiel Foundation.

The family of Dr. "A.C." Alexandre Clifton Miller Jr. created this Life Tributes page to make it easy to share your memories.

Send flowers to the Miller family.